I have been attending the ErgoExpo in Las Vegas since 2005 but this year saw two significant changes: the venue has moved from Caesar’s Palace to the Paris Hotel and the date changed from the autumn to August. As far as hotel concepts are concerned, I prefer the Paris to Caesar’s (which, in my view, was a contrived brand 50 years ago and has not redeemed itself in the intervening years). However, as with ‘all things Vegas’, the Paris hotel is, to European sensibilities, very much a caricature of the French capital rather than a realistic representation of any part of it.

If you could translate English into French simply by preceding every English or American noun with ‘le’ or ‘la’, my conversational French would be much better than it is!

In describing the event itself, it is probably desirable to think of it in three elements: expo, conference and networking.

Dealing with networking first, it is undoubtedly a useful event for me in business terms and I have made valuable contacts over the years. Some business opportunities materialise almost instantly and others have taken over five years to take shape. Beyond the pure business opportunities, I have made many very good friends since 2005 and, as with all good friends, each conference is an opportunity to pick up where we left off, ignoring the fact that it is a year (or more) since we last met up. 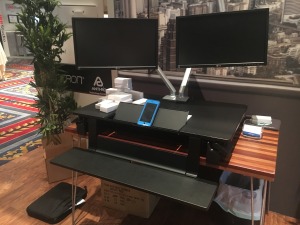 The expo has grown since I last attended but this expansion was largely due to the inevitable influx of (mainly Chinese) manufacturers of sit-stand desks and adaptors. There were also new models from established vendors but the selection was largely me-too products and a handful of minor innovations.

Pricing was the hot topic. In the US, many large employers are progressively replacing all office desks with sit-stand so the volumes are exponentially larger than the UK (where 10-20% sit-stand is the common ratio for new installations). As a result, the volumes are now enticing manufacturers with fully automated robotic operations, creating significant economies of scale. Time will tell if or when these financial benefits will impact Europe.

On the accessories front, there were three innovations that caught my attention.

Kinesis previewed the Freestyle Pro keyboard, which adds the on-board memory and programmable macro functions of their Advantage keyboard to the Freestyle form factor. (This was also a Delegates’ Choice award winner).

Contour Design previewed their Unimouse (an old name but a new product). This power-grip ‘ergo’ mouse introduces a previously-unknown level of adjustability and functionality and, in my view, has the potential to replace the Evoluent as the current best-selling vertical mouse.

G-Hold is a remarkably simple but highly effective answer to the issues arising from prolonged tablet use, significantly reducing the risk of musculo-skeletal problems.

Since the global seating manufacturers have representation in Europe and the indigenous American manufacturers do not generally export to Europe, I never spend much time looking at chairs.

The conference keynote presentations were interesting, entertaining and useful. The body of the conference contained a more variable mix of high- and lowlights. It was

In conference terms, my highlight this year was to hear and then meet Dr Joan Vernikos, author of ‘Sitting Kills, Movement Heals’ and ex-NASA scientist, whose work over 30 years provides some of the most valuable and reliable insights into ‘the sit-stand question’.

Finally, I mentioned at the outset that the event had moved to August from autumn. Before attending, I was concerned about uncomfortably high outside temperatures in August. As it turned out, this was not an issue. However, leaving Vegas for Houston to visit family when Hurricane Harvey had decided to join us certainly was an issue. But my Houston Adventure is a story for another time!

This entry was posted on Tuesday, September 12th, 2017 at 09:37 and is filed under Business Thinking. You can follow any responses to this entry through the RSS 2.0 feed. You can leave a response, or trackback from your own site.